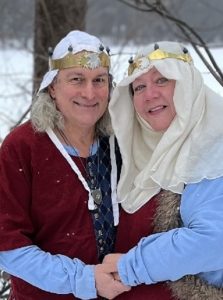 The Seneschal acts as the legal officer of the Barony. It is their responsibility to be the liaison between the group and outside entities.

The Exchecquer is the Treasurer for the Barony. It is their responsibility to balance financial accounts and report financial status and activity to the Regional/Kingdom offices.

The Herald acts as the voice of the Baron and Baroness. It is their responsibility to assist the populace in getting personal names and heraldry registered with the SCA College of Heralds.

The Minister of Arts and Sciences monitors and encourages the historical art forms and science projects of the Baronial populace.

The Armored Marshal monitors the training of fighters in the chivalric arts (aka heavy fighting).

The Rapier Marshal monitors the training of fighters in the rapier arts (aka fencing).

The Archery Marshal monitors the training archers in the art of range and combat archery.

The Chronicler publishes Baronial newsletter, The Holmgang. It is their responsibility to gather or produce the articles and artwork that is published.

The Chatelaine assists newcomers in obtaining information about the SCA and finding those of similar interests.

The Minister of Youth promotes/provides historical education and activities for youth at events.